Let's start with something you already know... trans fat is bad. In fact, I'd go as far as to say that trans fat should probably be at the top of your list of things to avoid eating. At the very best it would be in second place behind "deadly poison." In case this now common knowledge information is new to you, feel free to learn exactly how bad it is here, here and here.

Now for something many people still don't know (unless of course you've seen me mention it throughout this site about 48 times already). A few years ago, the FDA came up with some hilarious guidelines for food companies to follow when it came to listing the trans fat content of their food in the food's nutrition facts panel. Basically, trans fat content only needs to be listed if the food contains 0.5 grams or more of it per serving.

What that means is, if a food contains 0.49 grams of trans fat in 1 serving, that food will have "Trans Fat: 0 grams" listed in its nutrition facts. This is when the hilarity ensues.

And while you are processing all of this, bare in mind that the American Heart Association recommends that we consume a maximum of 2 grams of trans fat per day. However, they go on to say that there is enough naturally occurring trans fat in some meat and dairy products that most people already reach this maximum 2 grams without the additional consumption of the man-made trans fat found in the types of foods on the list below.

Long story short, people who care about their health should ideally be aiming to consume as close to 0 grams of trans fat per day as they possibly can.

With all of that being said, I thought it would be fun to bring to your attention some of the most surprising foods that, despite what their labels say, actually do contain some amount of trans fat per serving. Here now are 10 of those foods... 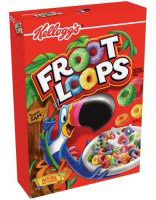 Here's one that will come as no surprise to anyone who has seen the Breakfast Cereal Comparison. Of the 50 popular brand name cereals I looked at, 12 contained trans fat. In no specific order, they are:

Most people would see the brand "Quaker" and/or the term "granola bar" and think "healthy." They certainly wouldn't think "trans fat." Well, they'd be wrong. That wholesome Quaker brand isn't quite so wholesome after all. Their ads implore parents to give these things to their kids as a good quality, healthy snack. Unfortunately, these granola bars contain some amount of trans fat per serving.

These are also one of the many products that go the extra mile to include "0g Trans Fat" right on the front of the package for added emphasis. On the bright side, I've been told that there is a tiny asterisk next to this with an even tinier note that basically says "Oh, and by the way, this product actually does contain a small amount of trans fat in each serving." How family friendly of them. 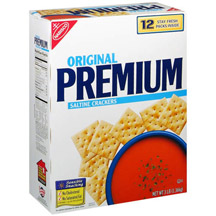 Also called soda crackers, saltine crackers don't exactly scream trans fat based on the fact that they are, you know, plain, boring, tasteless, white crackers. This apparently doesn't matter. I haven't investigated every saltine cracker ever created, but the most popular brands, such as Nabisco's Premium Crackers and Keebler's Zesta Saltine Crackers, do indeed contain some amount of trans fat.

This would lead me to assume that there's a good chance many other brands of these crackers probably do as well.

Are you familiar with the brand Special K? You know... they make that typical, useless, empty calorie Special K cereal which they hilariously market as a weight loss product? If so, then you are probably also familiar with the other products they released over the last few years which they also try to sell under the guise of being health/weight loss food (which none of them even remotely are).

Well, here's a little fun fact for you. Special K's entire line of these foods all contain some amount of trans fat per serving. Specifically, this includes all types and flavors of their:

For those interested, while their newer Chocolatey Delight cereal does indeed contain trans fat as well, their original plain old cereal does NOT. It just contains empty calories -- sorry -- I meant to say "weight loss magic." My mistake. 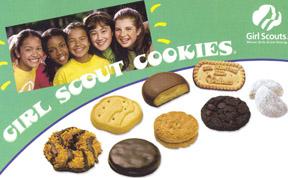 The second and more important reason these are on this list is that a couple of years ago, the girl scouts made a big deal over the fact that their cookies were going "trans fat free." I guess at some point girl scout cookies contained a fairly large amount of trans fat, so much so that they felt it necessary to both remove it and then go out of their way to mention that they were removing it. The teeny tiny problem with this removal is the fact that girl scout cookies still contain some amount of trans fat per serving.

I guess they have to get their "Raise A Stranger's Cholesterol" badge somehow. 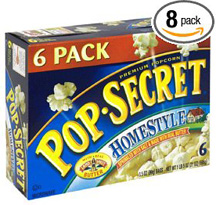 We know snack foods are a common source of trans fat. Potato chips? Sure. Cheese curls/balls/puffs/doodles? Of course. But popcorn too? Well, depending on the brand... yup.

I haven't looked at every popcorn brand on the planet, but, as far as microwavable popcorn goes, every single type from the brand Pop Secret contains trans fat (in some cases up to 6 grams per serving). As far as regular, ready-to-eat popcorn goes, several types from the brands Herr's and Frito-Lay also contain some amount of trans fat per serving, some of which were the "light," no butter versions.

A bunch of other brands didn't, but the ones mentioned above did, which leads me to believe at least a few others do as well. 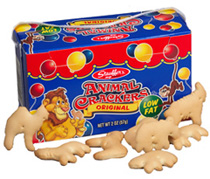 As if barely looking like actual animals in the first place wasn't bad enough, it turns out the 2 most popular brands of animal crackers that I know of, Barnum's Animal Crackers (by Nabisco) and Stauffer�s Original Animal Crackers, both contain some amount of trans fat per serving.

See kids, animals can be dangerous.

If there was ever to be some at least moderately healthy cookie, you'd think the Fig Newton would be that cookie. I mean... it's a cookie... whose main ingredient is fig. Not chocolate or vanilla filling... but fig. And Nabisco certainly hasn't been shy about that fact. Five seconds of research has reminded me that they've claimed a fig newton contains more fruit than a nutri-grain bar and that it's "the cookie that thinks it's a fruit."

That sounds great and all, but I'd sure like to know what fruit it thinks it is because, last time I checked, no fruit contained trans fat. Fig Newtons on the other hand, do. On the bright side though, their Fat Free Fig Newton honestly does NOT contain any trans fat.

Hopefully someone will inform Brian Regan. 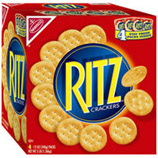 Sure, these might not be quite as surprising as saltine crackers (as these actually have a taste), but even still, some may find it surprising that Ritz Crackers contain some amount of trans fat per serving. And yeah, even the reduced fat version and the whole wheat version of Ritz Crackers do as well.

Mmmmm, forget the cheese. Let's put some Lipitor on those Ritz. 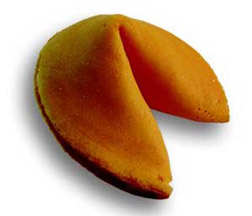 I figured I'd end on a weird one. I first discovered that fortune cookies contain trans fat when one of my fortunes said "Your risk of heart disease will be increasing." Thank you, I'll be here all week.

I don't get something. How do you know that any of these foods contain trans fat if their labels all say "Trans Fat: 0 grams?" Are you making this up? Are you just guessing? Are you a food psychic? What's the deal?

Good question. I'm glad I pretended someone asked it. No, I'm not making it up or guessing, and I don't have any psychic food powers. It's actually really easy to tell if a food contains trans fat even if the label says it doesn't. All you need to do is read through the ingredients. Here's a direct quote from the FDA's web site explaining it:

So, even if the label clearly states "Trans Fat: 0 grams," and even if the product goes an extra step to print "0g of Trans Fat" somewhere on the front of it, if you see any of the above words in the ingredients, then it contains at least some trans fat per serving.

Why these foods? Aren't there plenty of other common foods that contain trans fat that many people aren't aware of?

You bet there are. These were just the 10 best/most surprising ones I could think of. If you happen to know of or come across some other good ones, then by all means pass them along to me. As long as I can confirm it, I will gladly add them to this list and let it keep growing. Just leave a comment and let me know.

What types of foods contain the most trans fat? Like, which are the least surprising sources of it?

I'd say fast food is the most abundant source of trans fat, with desserts, and doughnuts, and pastries coming in second place. It's also found in many other typical junky foods. You'll probably be interested in checking out my list of the 88 Fast Food Items Highest In Trans Fat as well as Fast Food Restaurants & Nutrition Facts Compared.

How much trans fat are we supposed to eat per day?

It's FREE! Join over 10,000 subscribers getting free tips and updates to help you lose fat, build muscle and be healthy.